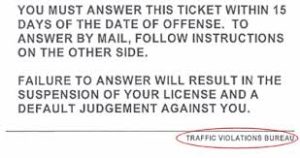 What To Do If You Receive A Traffic Ticket for the traffic violations bureau.

If you are issued a ticket for a non-criminal moving traffic violation in the five boroughs of New York City or Rochester, it will be handled by a New York State Department of Motor Vehicles (DMV) Traffic Violations Bureau (TVB). This allows courts in these areas to concentrate on criminal cases, including driving offenses, such as driving while intoxicated and driving while suspended or revoked (aggravated unlicensed operation). However, TVBs do not handle parking violations. If you plead not guilty to a traffic ticket in one of these TVB areas, your case will be heard by a DMV Administrative Law Judge (ALJ), an experienced attorney with special training in the Vehicle and Traffic Law. An ALJ has the authority to decide whether or not you are guilty and to set a fine if you are found guilty. An ALJ also has the authority to revoke or suspend your driver license and/or auto registration when required by law or when the ALJ believes it is in the interest of traffic safety. Just as in traffic courts in other areas of the state, you may present witnesses and evidence at a hearing before an ALJ and be represented by an attorney.

IF YOU ARE ISSUED A TICKET

Don’t delay! Hire an attorney to deal with your ticket. If you ignore the ticket your driver license will be suspended. Later, you could be found guilty of the charge because of your failure to respond (a default conviction). Your license would be suspended for not paying the fine and a judgment would be entered against you. Driving with a suspended license is a crime. A felony conviction may result in fines of up to $5,000, jail, probation, or confiscation of your vehicle. As the number of suspensions you have increases, the penalties also increase. A driver is suspended for each ticket not answered and each fine not paid.

Why our law firm?

Accumulating too many points on your license for traffic violations can result in serious penalties.

We will aggressively fight each traffic ticket to help you avoid points and the loss of your driving privileges.

Protect Your Driving Privileges! Did you know that when you pay a ticket you are pleading guilty?

Some traffic violations can have very serious repercussions.

Depending on the nature of the traffic violation, some of the potential penalties you could face include:

Below are some common traffic tickets issued in this County